The game of short mat bowls is relatively simple and most players will understand the principles fairly quickly. In short mat bowls you will meet players of all abilities and the levels of which you can aspire to your own standard. Short Mat Bowls is one of the few sports that can be actively participated in by both men and women of all ages from the very young to those of  an elderly age, it is played by people of all fitness levels from wheelchair users,  to those fully sighted or blind or those who have other forms of disabilities. There are number of aids and attachments which may help those with a disability. Bowls has number of variations but here we concentrate on Short Mat Bowls administered by The English Short Mat Bowling Association (ESMBA).

The game of short mat bowls can be played in teams of fours, triples, pairs and singles, most clubs will play in team events of either triples or fours, in many clubs across England the game will be played  of mixed gender. The object of the game is to get as many of your or your team bowls nearest to the jack as possible. The jack is spherical in shape and approximately between 63 to 70mm and weighs between 14 and 32 oz with a normal colour of yellow. There may be times when your skip asks you to deliver a bowl to another area to cover the potential movement of the jack.

Most local club practice nights has dress down code of which normal wear can be used , The exception is  bowls shoes, these must be worn on the mat at all times, some local clubs require you to wear mid grey trousers or skirt below the waist plus white or club colours above the waist with flat heelless bowls shoes ( shoes must  have no tread on soles) There is a correct  dress code when playing matches of greys and whites (or club colours above the waist), these can be purchased from retail shops or online.

A set of bowls consists of four bowls all of the same size, make and colour,  Many local clubs have spare bowls to borrow which helps new bowlers to determine the type bowl that suits their hand for delivery. A full set of bowls is probably one of the bowlers largest expenditure and should be chosen wisely, preferably in conjunction with coaching staff or an experience player. Many people believe wrongly that the bowls are weighted on one side  in order for them to turn, but bias as this is known is purely down to the very accurate shaped machining of the bowls

The Maximum length of a Mat is between 12200mm and 13750mm  with the width 1830mm with a tolerance of 50mm. The diagram on the right only shows half of a mat with the exact same the opposite side. 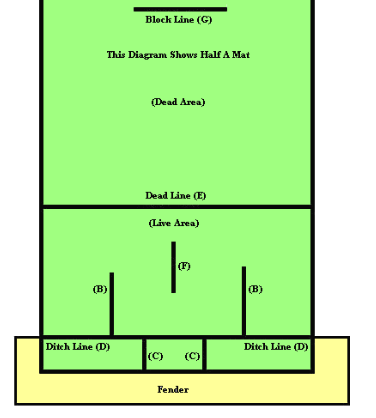 To delivery  bowl you must use a delivery mat placed in position C.

When a player makes a delivery his foot must be on the delivery mat and when delivering the bowl his leading foot must be within lines marked with a B.

If a bowl is carried or rolled beyond the dead line marked with an E the bowl becomes dead.

To start the game the jack can be  placed anywhere on the jack line  marked with an F.

If a bowl touches or enters the front ditch line marked with D and C without touching the jack the bowl becomes dead and must be removed from play.

Once a bowl has been delivered it can come to rest anywhere in the live area.

SINGLES    Played between two contending players, each playing with four bowls singly and in turn

All of the above shall be played until either a time limit or number of ends determined in the rules of a competition, the number of bowls played in each game may also vary according to the rules of the competition.

Before the game starts, make sure that you are ready in plenty of time, if the skip has not done so, introduce yourself to the opposing side.

One of the team will toss a coin to determine who has the mat (i.e who will place the mat and deliver the jack and first bowl). The winner of the toss has the choice of taking the mat or give it to their opponent, There is a slight advantage with winning toss in order to deliver the last bowl of the end. In subsequent ends, the winner of the previous end will take the mat and bowl first.

After deciding who delivers the first bowl ,the delivery mat is placed between the area C on the diagram with the back of the delivery mat placed against the fender (the back line of area C) The jack is placed by the skip anywhere on line F to an agreed position by the lead. The bowls will then be delivered in turn until the last bowl has been delivered. After all the bowls have been delivered your team or your opponents whoever is the nearest to the jack will be counted. Sometimes to determine the nearest to the jack a measure will be required.

If in the course of a delivery a bowl touches the jack irrespective of how many bowls it touches on the way,  the bowl will be chalked. to mark it has touched the jack, This means that if at some stage in the end this bowls enters the ditch (see diagram area D) the bowl remains live and may be counted as part of the result, any bowl that has not touched the jack and comes to rest in the ditch area is a dead bowl.

When single games requires a marker they will assist the players by marking any touches, undertake any measuring and monitor the games functions, i.e the mat and fender are correctly aligned, remove dead bowls, adjudicate on line decisions, answer questions from players etc. on more formal games there may be umpires present to assist with any laws or rules and to assist with measuring. The umpire may also be called on by the marker to advise. The Umpires decision is final

There is no such thing as an ideal delivery, Many top players have a delivery technique which unique to them, the most important thing to remember the delivery must be consistent for accuracy. Coaching staff will explain what is believed to be the one of the better techniques and will advise you how to hold the bowl.

When delivering the bowl some people stand on the mat with both feet parallel slightly apart facing the line along which they intend to send the bowl and take a step and deliver their bowl, another option is to  crouch down and place one foot on the delivery mat with your front foot extend in front of you facing the way you deliver. if on your delivery your foot is not fully on the delivery mat it will be judged as a foot fault and bowl removed from the mat, When delivering the bowl your stance and grip on the bowl should be comfortable.

Bowlers who stand with two feet on the delivery mat would normally stand so that the bowler has both comfort and control and bowl on a line just outside the right hip (right handed bowlers) allowing an unimpeded back swing.

bowlers who crouch down and have there back foot on the delivery mat and their front foot extended,  normally deliver the bowl between their legs.  A smooth follow through is important regardless of your delivery stance.

Concentration is of course an essential requirement for any bowler aspiring to improve their standard so many players allow outside factors to interfere with their concentration  and probably the greatest single reason why they struggle to improve.